Wise Beyond His Years

I've found that some of mine and Joseph's most profound conversations happen while in the car.  Some of those conversations end in some sort of "backseat confession," as I like to call them...the times when he tells me what he got in trouble for.  But most often, they end with him saying something that reminds me how very wise he is.

Two years ago, I went to AT&T to get a new phone and took Joseph with me.  He was 2 1/2 at the time.  He was small for his age (still is), extremely talkative (still is!), and extremely sweet (still is!).  The kind sales staff at the AT&T store felt bad for the amount of time we had to wait, but were impressed with his patience and interest in everything they were doing.  When it was finally our turn, they let him sit on the counter top and use the scanner to scan outdated bar codes and items that were being discontinued.  Then, they gave him a REAL AT&T name tag with HIS name on it.  Finally, one of the guys brought out an old blue cell phone that had been discontinued.  It was a floor model, so it never really worked anyway, but it had the appearance of a fully functioning phone.  It was about to be thrown away or recycled, but they gave it to Joseph so he could have a phone of his own.  It was like Christmas in July! 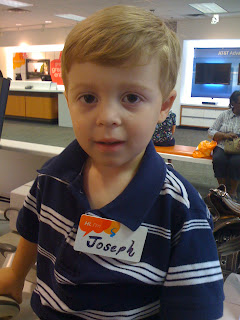 Surprisingly, he has kept up with his name tag and cell phone and he still likes to wear his name tag around the house from time to time.  As we were driving one day, he asked me why those people at the phone store gave him that name tag and phone.  I told him that it was because he was such a special boy.  It was the simplest explanation I could come with at the time.  Then, he got me.  He said, "But mom, ALL kids are special."  I was speechless for a moment.  I was stunned.  Even as I write this, I still am.  Where did he get that?  How did he know?  Not that it really matters, because he's absolutely right.  All kids ARE special.
Posted by Carrie at 10:05 PM

Carrie
I am a stay at home mom and the title of my blog is the lyrics to a song my son made up when he was 2 1/2. I married my best friend from college in 2006, had a baby in 2007 and life has been a whirlwind ever since! In April 2011, we welcomed our baby girl. I enjoy spending everyday with my babies, but like all moms, I could sometimes use a break! I hope this blog will prove that I haven't wasted my college education by being "just a mom."